Also, with data from the U.S. Census Bureau, in 2019, more than $197 million in goods were exported by the United States to Senegal, which showed a decrease of 32% from the amount of export seen in 2018; while Senegal imported goods totalling $131 million, showing an increase of 3% in the same year as the trade surplus of the U.S. totalled 65 million.

Identifying top exports and imports helps us paint a valuable picture of the U.S.-Senegalese trade relationship. According to the United States International Trade Administration, it is shown that passenger vehicles and parts, mineral fuel (including LNG and coal), machinery and plastic were the top four goods the U.S. exported to Senegal in 2019, while prepared meat plus fish products, artificial hair products, minerals and ores, and slag, ash, and fertilizers were the top imports from Senegal. 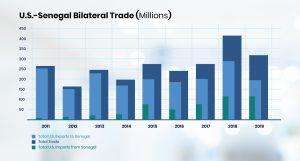 Senegal is a beneficiary of the U.S. African Growth and Opportunity Act (AGOA). Under this agreement, Senegal can primarily ship processed foods, seafood, and cosmetics. It is also part of ECOWAS – Economic Community of West African States – with which the United States has a trade agreement and an investment framework that makes it easy for the United States to trade with Senegal.

Also, Senegal has signed and ratified the African Continental Free Trade Area (AfCFTA), the free trade pact that promises to cover over 1.2 billion people with more than $3 million in Gross Domestic Product (GDP). This will also help foster bilateral trade between the United States of America and Senegal.

Does your business need help with paying partners, buyers, and sellers in, out, and within Africa with ease? Trade and accelerate your business operations in frontier markets through better cross-border payment and last-mile settlements, foreign exchange, and treasury services with AZA Finance.

Schedule time with a payment expert today to learn how to get started.

2 weeks ago
2 months ago