The IMF this week called on private creditors to step up debt talks with Chad as part of a restructuring process that will unlock funding the country urgently needs as its economy staggers from the combined shocks of Covid-19, lower oil prices, climate change and terrorist attacks. Government creditors have already reached an agreement with Chad after it became the first country to ask for a debt overhaul under a new G20 common framework. Unlocking those funds is vital given that Chad’s financial strains have forced the country to cut critical social and development spending, which could have serious social and security implications if not reversed, the IMF said.

Record-low Naira poised for new depths
The Naira hit a fresh record low against the dollar this week, depreciating to 535 on the unofficial market from 530 at last week’s close as demand for the greenback from importers continues to bump up against scarce market liquidity, which has been exacerbated by the Central Bank of Nigeria banning FX sales to the country’s bureau de change outlets. Despite the current weakness, the central bank on Tuesday said it still expects the country’s unofficial and official rates to converge. The Naira was trading at 411.30 to the dollar on the NAFEX window this week. We expect the currency pressure to persist in the coming days as demand for forex continues to outweigh supply. 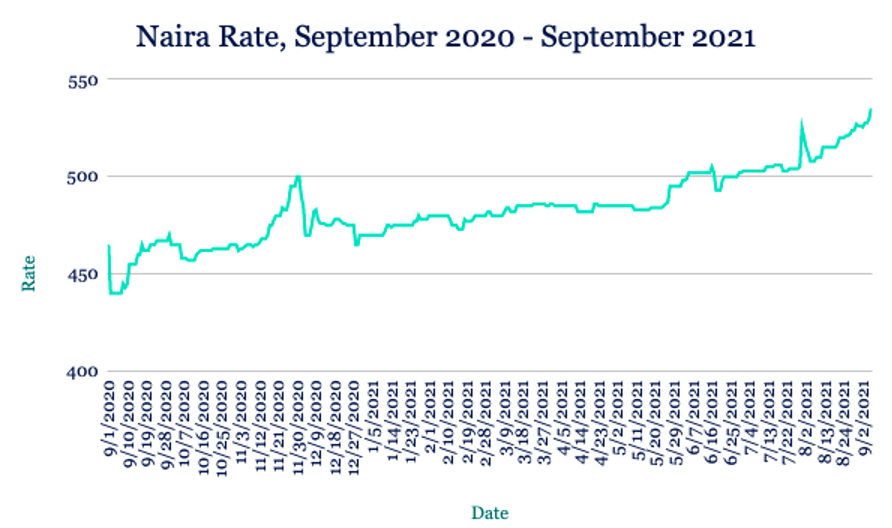 Cedi reprieve unlikely to last
The Cedi strengthened slightly this week, trading at 6.015 to the dollar compared to 6.05 at last week’s close after the Bank of Ghana sold $75m into the market through its FX forward auction. That helped relieve the recent pressure on the Cedi, which has been strained by increased dollar demand as economic activity ticks up. Inflation pressures are also weighing on the currency, with Ghana’s inflation rate rising to 9.7% in August as a result of higher food and transport prices. Against that backdrop, we expect sustained pressure on the Cedi over the coming week. 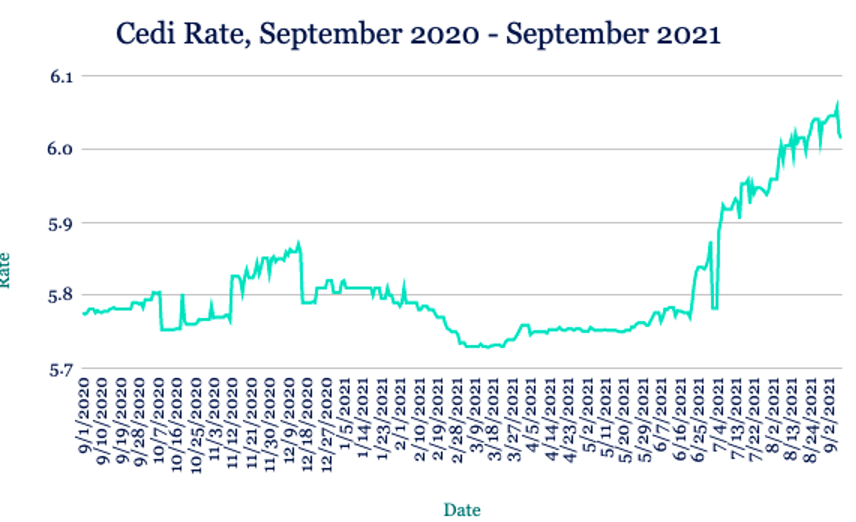 Rand strengthens as the economy grows
The Rand appreciated against the dollar this week, trading at 14.16 from 14.31 at last week’s close after South Africa’s statistics agency showed the country’s economy grew by 1.2% in the second quarter, up from 1% during the first three months of the year. That expansion was supported by activity in the transport and communication sectors, as well as agriculture. Against this backdrop, we expect the Rand to maintain current levels short term. 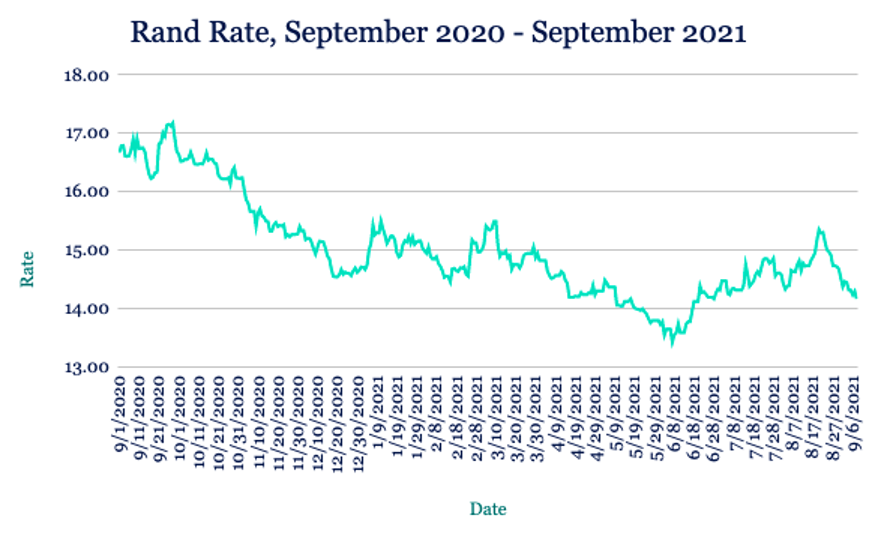 Pound weakens as Egypt’s COVID cases increase
The Pound weakened marginally against the dollar this week, slipping to 15.72 from 15.70 at last week’s close. Egypt’s health ministry this week reported an increase in COVID-19 cases, warning of a potential hike in infections over the next two months. Also this week, Finance Minister Mohamed Maait said Egypt needs to relax regulations and simplify doing business in the country in order to spur private sector investment and boost growth to support the economy’s recovery from the coronavirus pandemic. We expect the Pound to maintain current levels over the coming week.

Bond inflows to boost Kenyan Shilling
The Shilling depreciated against the dollar this week, edging lower to 110.11 from 109.99 at last week’s close as Kenya’s current account deficit widened to 5.4% of GDP in the 12 months to July compared to 4.9% a year earlier, according to provisional data from Kenya’s central bank. Meantime, the central bank closed an offering of 75bn Shillings of infrastructure bonds this week, which tend to be popular with investors given that returns are tax exempt. We expect inflows from the infrastructure bonds to give the Shilling a reprieve from the recent pressure over the coming week. 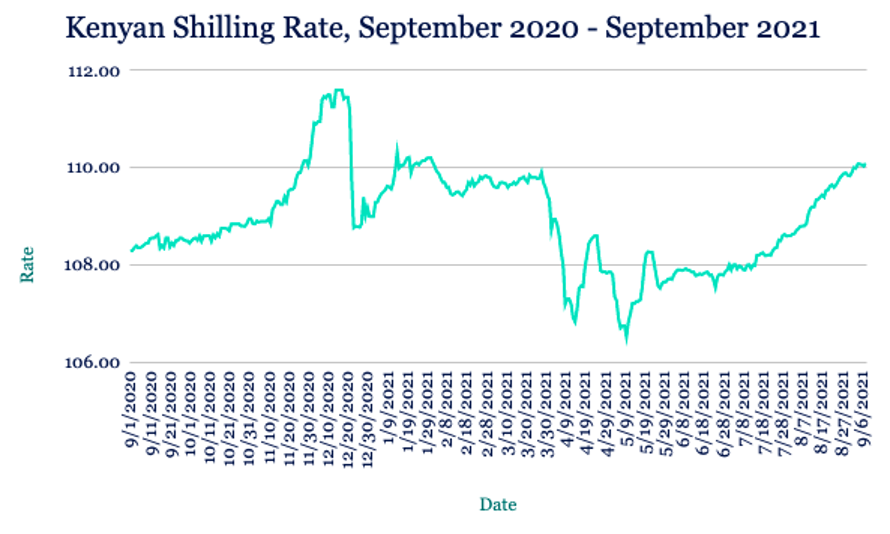 Dollar demand to keep pressure on Ugandan Shilling
The Shilling weakened against the dollar, trading at 3538 compared to 3528 at last week’s close as the partial lifting of Uganda’s Covid-19 lockdown spurred a resurgence in business activity that has increased importer demand for the greenback. We expect that dynamic to maintain pressure on the Shilling over the next seven days. 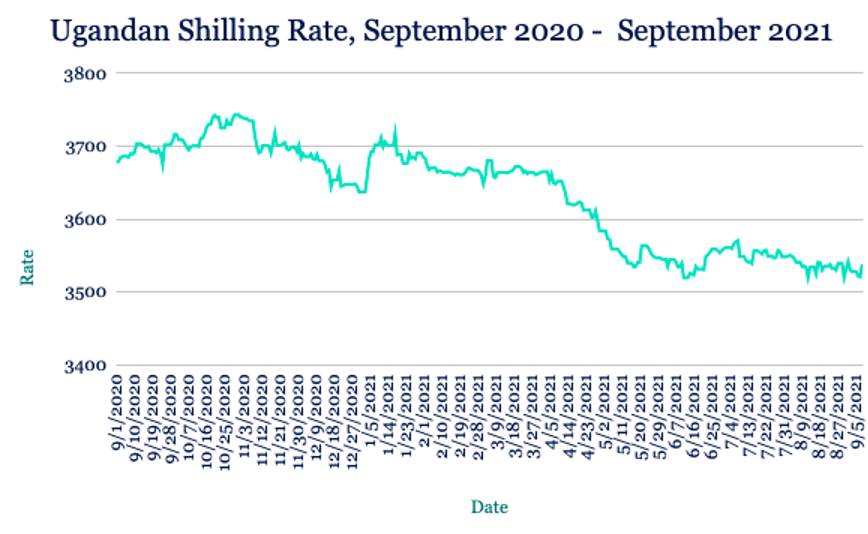 IMF emergency cash to keep Tanzanian Shilling stable
The Shilling was little changed against the dollar, trading at 2318, in line with last Friday’s close. The currency was supported by the IMF’s approval this week of $567m in emergency funding to help ease the impact of the Covid-19 pandemic on Tanzania’s economy. The funds will also be used to boost the country’s healthcare system and address its urgent balance of payments needs, the IMF said. We expect the Shilling to remain stable over the coming week, as the IMF’s financing support is balanced by demand for dollars for imports of consumer and capital goods including transport equipment, building and construction, machinery and oil. 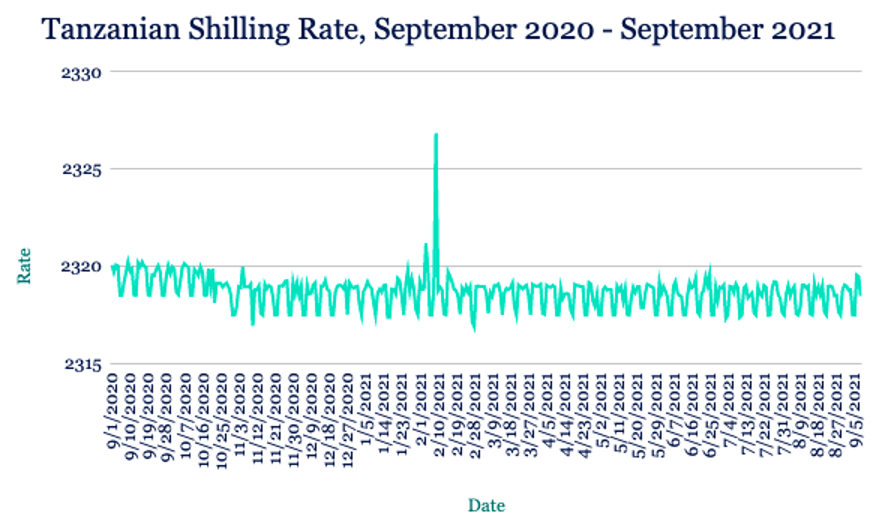