Since Sudan’s military on Monday seized power and arrested the prime minister, the country has suffered widespread violence, demonstrations and property destruction. Sudan has witnessed 17 coup attempts in its history, the most on the continent—five have been successful (not including Monday’s coup). The latest military takeover will put further strain on economic progress in the country, with the US among those suspending aid in response to the coup. The African Union also suspended Sudan from all AU activities until civilian rule is restored. Such responses will crimp inbound investment and choke off much-needed development and infrastructure project funding, damaging the economy and weakening growth.

The Naira was little changed on the unofficial market this week, trading at around 570 to the dollar. Amid sustained higher oil export prices, the country’s FX reserves rose again, hitting a roughly two-year high of $41.5bn, according to the central bank’s 30-day moving average benchmark. Nigeria also this week officially launched its digital currency, the e-Naira, after being delayed amid a claim against the central bank for trademark infringement. The bank’s Governor Godwin Emefiele says the e-Naira will boost financial inclusion, reduce the cost of processing cash and enable transparent welfare payments to eligible citizens. We expect the Naira to continue trading around the 570 handle in the near term. 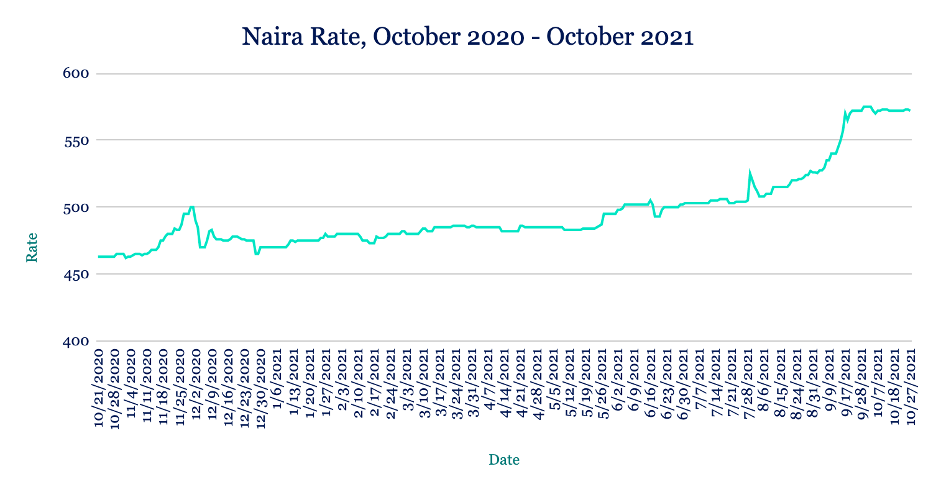 The Cedi depreciated slightly against the dollar this week, slipping to 6.103 from 6.08 at last week’s close despite the Bank of Ghana’s recent interventions to ease pressure on the currency through its forward FX auctions. Rising borrowing costs and investor preference for dollar-denominated securities have heaped further strain on the Cedi, though we expect that pressure to begin to recede in the near term following the approval of a $75m loan from the African Development Bank to the Ghana Infrastructure Investment Fund, which will help boost dollar supply.

The Rand depreciated against the dollar this week, trading at 14.84 compared to 14.75 at last week’s close on the back of declining commodity prices, particularly precious metals. The country’s economy is also facing crippling electricity-supply problems, with state-owned energy company Eskom announcing a series of planned power cuts this week. With global risk sentiment remaining mixed, the retreat in commodity prices and the country’s power issues could spell further weakening for the Rand in the coming days.

The Pound was unchanged against the dollar this week, trading at 15.66/15.76 after credit rating agency Standard & Poor’s affirmed Egypt’s sovereign rating at B for the fourth time since the start of the pandemic. The agency praised the country for its flexible and balanced policy framework to deal with the pandemic, along with the implementation of economic and structural reforms. We expect the Pound to remain stable over the coming week.

The Shilling weakened again this week, slipping to 111/111.2 from 110.95/111.15 amid continued dollar shortages, exacerbated by increased demand from oil and merchandise importers and rising inflation, especially fuel prices. That demand has seen FX reserves decline as the central bank attempts to ease the pressure on the currency. Reserves fell to $9.23bn this week from $9.26bn on Oct. 14, sufficient for 5.64 months of import cover. We expect month-end dollar demand to pile even more pressure on the Shilling over the coming week.

Bank of Uganda intervention to revive Shilling from 2-month low

The Shilling was trading at 3550/3560 this week, clawing back last week’s losses after touching a two-month low of 3635, with offshore dollar demand cited as the main cause. This week’s recovery came after the Bank of Uganda stepped in to shore up the Shilling by selling an undisclosed amount of dollars into the market. We expect that intervention to keep the currency steady over the next seven days.

The Shilling depreciated slightly this week, trading at 2302/2312 from 2300/2310 at last week’s close, with inflows from commodities and NGOs cushioning against a steeper decline amid dollar demand from SMEs, oil companies and manufacturers. We anticipate demand for the greenback will increase as we approach month-end, though we expect that to be offset by increased inflows from agricultural commodities and investors, thus keeping the Shilling stable.