Tunisia’s President Kais Saied—who in July suspended parliament and seized executive powers—has named Najla Bouden Ramadhane as the country’s first female Prime Minister. The appointment of Ramadhane, who was a professor at an engineering school, took market watchers by surprise. She will now be responsible for leading the country’s transitional government. Saied, who was elected on an anti-establishment ticket in 2019, said the suspension of parliament and sacking of the previous Prime Minister Hichem Mechichi was in response to the growing social unrest over the country’s financial woes and the government’s mishandling of the coronavirus pandemic.

Naira edges back from record low

The Naira appreciated this week on the unofficial market, trading at 570 to the dollar having closed last week at a record low of 575. That slight rebound followed a fall in demand for the greenback on the parallel market, with the central bank’s 30-day moving average FX reserves increasing by 3.6% over the past week to $37.6bn. Also this week, Nigerian President Muhammadu Buhari sought approval from the National Assembly to raise the 2022 budget by NGN2.47tr to NGN16.45tr, reflecting new fiscal terms in the recently passed Petroleum Industry Act and other critical expenditures in the 2022 budget. We expect the more positive environment for the Naira to continue in the coming week. 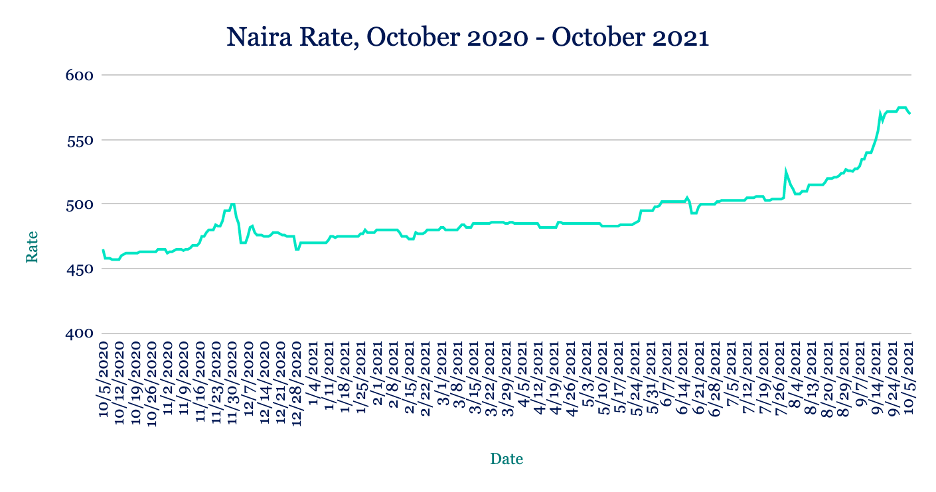 The Cedi weakened slightly this week against the dollar, trading at 6.05 compared to 6.04 at last week’s close, though the persistent pressure experienced in the third quarter—which saw the currency depreciate more than 4%—has started to ease. As we move into the fourth quarter, the syndicated $1.5bn cocoa loan should start being disbursed, which in turn should prevent the Cedi from experiencing the same scale of weakness seen in the previous quarter. Against that backdrop, we expect the Cedi to maintain these levels in the near term.

Rand pressure to continue amid US debt ceiling concerns

The Rand remained under pressure this week, depreciating to 15.09 against the dollar from 14.87 at last week’s close amid a broader retreat from riskier assets that has particularly hobbled emerging market currencies. That decline came even as South Africa’s current account showed a surplus of ZAR42.2bn—ZAR3.4bn more than forecasted, supported by higher commodity prices. The country also released its PMI data this week, which increased to 50.7 in September, the highest reading since June mainly due to the relaxation of COVID restrictions. With US debt ceiling jitters pushing treasury yields higher, we expect the Rand to remain under pressure in the near term.

The Pound depreciated slightly against the dollar this week, trading between 15.65 and 15.75. Amid Egypt’s efforts to ramp up COVID-19 vaccinations, the US government said it would send more than 8 million doses of the Pfizer and Moderna vaccines. We expect the vaccine rollout to help drive the recovery of sectors such as tourism, supporting economic growth. With that in mind, we forecast a stable Pound over the coming week.

The Shilling weakened to a new 2021 low this week, trading at 110.70/111.00 compared to 110.40/110.70 on the back of increased dollar demand from importers. Kenya’s central bank has been releasing dollars into the market in a bid to relieve the pressure on its currency, with FX reserves dropping slightly to $9.4bn from $9.5bn the previous week, adequate for 5.77 months of import cover. Meantime, Kenya’s horticulture exports grew by 25% between January and August compared to the same period in 2020. Rising fuel prices in Europe are impacting flower growers in the region, forcing buyers to look elsewhere and potentially boosting exports from East Africa. We expect the Shilling to remain stable in the coming week with dollar demand from importers matched by export inflows, especially in horticultural goods.

Ugandan Shilling poised for gains ahead of MTN share sale

The Shilling weakened to 3555/3565 to the dollar from 3525/3535 at last week’s close, driven by increased interbank and corporate demand for the greenback. African telecoms giant MTN this week said it is planning to sell a 20% stake in MTN Uganda through an initial public offering that could raise about $280m and value the business at $1.4bn. We expect to see the Shilling gain over the near term with support from investor inflows.

The Shilling continued to trade at a 16-month high against the dollar, appreciating to 2300/2310 from 2305/2310 at last week’s close. A push to encourage the Tanzanian diaspora to invest in the country has helped boost the investment value of Tanzania’s capital markets to TZS31.4tr in the first nine months of the year compared to TZS28tr during the same period in 2020. We expect to see more support for the Shilling in the near term, driven by inflows from gold and agricultural exports.