Ethiopia seeks to stem surging inflation
Ethiopia’s rising inflation has forced the country’s central bank to double the cash reserve ratio requirement for commercial banks to 10% in a bid to reduce liquidity in the market. Inflation in Ethiopia—which has been gripped by civil war since the country’s Prime Minister Abiy Ahmed ordered a military incursion into the northern Tigray region last November—has been rampant this year, hitting a high of 26.4% in July and hovering near or above 20% since January. Commercial banks will also be required to submit half of the foreign exchange they receive from exporters, remittances or aid agencies, up from a previous requirement of 30%, as the government seeks to boost its foreign exchange earnings.

Naira hits record low amid CBN restrictions
The Naira depreciated to a record low against the dollar in the unofficial market this week, trading at 528 compared to 522 at last Friday’s close after Nigeria’s central bank banned microfinance banks from executing foreign exchange transactions. Liquidity on the unofficial market has been strained since the central bank restricted the sale of dollars to the country’s bureau de change operators in July. Meantime, the country is ramping up its digital currency plans, with the e-Naira set to enter a pilot phase in early October amid hopes it will boost e-commerce activity and fuel economic growth. With the low supply of forex in the market, we expect the Naira to remain under pressure in the coming days. 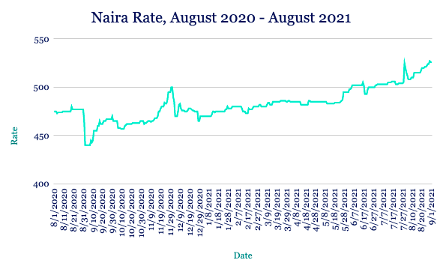 Cedi pains continue as inflation hits four-month high
The Cedi depreciated slightly against the dollar this week, declining to 6.04 from just under 6.01 at last week’s close as increased dollar demand persists in the market. Rising month-on-month inflation—which hit 9% in July, the highest since March—and the elevated cost of living have also weighed on the Cedi. Against that backdrop, Ghana launches a pilot for its e-Cedi digital currency this month as a stepping-stone to a wider roll out. We expect the pressure on the Cedi to be sustained over the coming week amid unwaning demand for dollars. 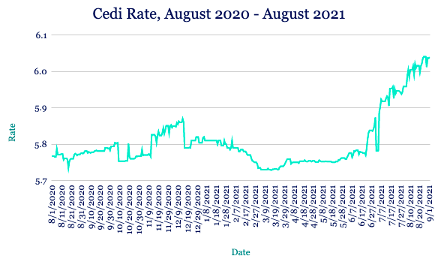 Rand bouyed by Fed signals
The Rand strengthened against the dollar this week, trading at 14.37 compared to 14.72 at last Friday’s close after investors were buoyed by comments made by US Federal Reserve Chair Jerome Powell that the central bank is in no hurry to completely end its pandemic-era stimulus programme even if it does start tapering this year. Investors also poured back into South Africa’s local bond market amid expectations that US Treasury yields will remain lower for longer, supporting the Rand. With risk appetite increasing, we expect the currency will continue to make gains against the dollar in the coming days. 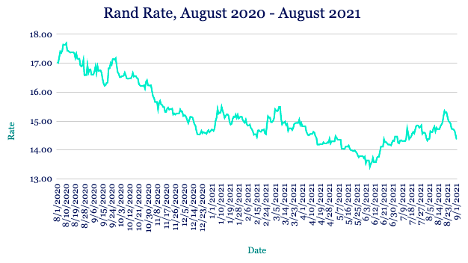 Food exports steady Egyptian Pound
The Pound traded flat to the dollar this week at 15.70, propped up by an increase in exports from Egypt’s food sectors which in turn have supported the economy. Exports from the agricultural sector, for instance, increased 14% to $2.38 billion during the first seven months of the year, according to the country’s Export Council for Food Industries. With the IMF allocating $2.8 billion to Egypt from its Special Drawing Rights programme, we expect the Pound to remain supported at current levels over the coming week.

Kenyan Shilling slides as inflation jumps to 18-month high
The Kenyan Shilling depreciated to 110/110.30 to the dollar from 109.75 at last week’s close amid increased demand for the greenback from importers, especially in the energy and manufacturing sectors, which outpaced inflows from exporters and remittances. To support the Shilling against a sharper decline, Kenya’s central bank has been deploying its forex reserves, which fell to just under $8.99 billion from roughly $9.19 billion the previous week. The country’s monthly consumer price index report showed inflation edged up to 6.57% in August—an 18-month high—lifted by higher food and non-alcoholic beverage prices, as well as rising transportation, housing, water, electricity, gas and other fuel commodity costs. We expect the Shilling to remain under pressure this coming week, though support from the country’s forex reserves should prevent a significant depreciation. 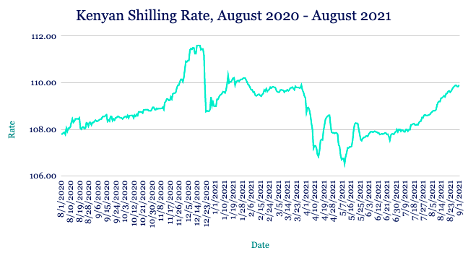 Ugandan Shilling holds firm as inflation falls
The Shilling was steady against the dollar this week, trading at 3535/3545 as corporate demand for the greenback was offset by month-end export inflows into the country. The Shilling was also supported by falling inflation, which declined to 1.9% in August from 2.1% in July on the back of lower transport costs. We expect dollar supply and demand to remain in balance over the next seven days, helping to keep the Shilling stable. 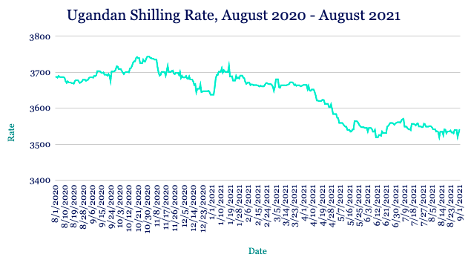 Rising gold exports to support Tanzanian Shilling
The Shilling was unchanged against the dollar this week, trading at 2314/2324 compared to 2318.32 at last week’s close, supported by inflows from agricultural exports, investors and other funding coming into the country. One such example is the $112 million secured this month from the Global Fund to Fight AIDS, Tuberculosis and Malaria that will support Tanzania’s Covid-19 response and reduce strains on the country’s healthcare services. The Bank of Tanzania also reported an increase in gold exports, which rose to $3 billion in the 12-months to July, 9.9% higher than the same period a year earlier. We expect the Shilling to remain supported by inflows from the mining sector and agricultural inflows from cotton and tobacco. 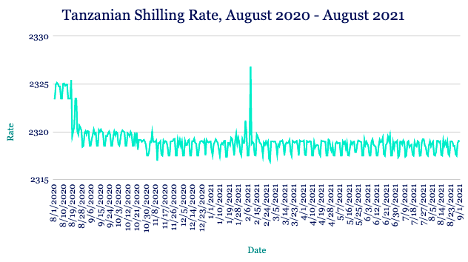