The African Development Bank has laid out plans to support the growth of the continent’s free trade area by guaranteeing loans worth $7 billion over the next five years to help companies sell their products across Africa. That follows Afreximbank’s pledge earlier this year to make available $40 billion to boost intra-African trade over the same period. This type of financial support is much needed to spur economic growth within countries signed up to the African Continental Free Trade Area, in particular helping small and medium-sized companies as they seek to bounce back from the impacts of the coronavirus pandemic.

The Naira depreciated against the dollar this week, sliding to 573 on the unofficial market from 570 at last Friday’s close. That weakness comes even as Nigeria’s foreign exchange reserves continue to grow, rising to $38.4 billion at the end of last week, according to the Central Bank of Nigeria’s 30-day moving average reserves data. Earlier this week, the country’s Vice President Yemi Osinbajo called on the central bank to “let the Naira be as reflective of the market as possible to boost supply,” stating that the currency is artificially overvalued, which is discouraging foreign capital inflows. That is in stark contrast to the views of President Muhammadu Buhari, who has consistently spoken out against a devaluation of the Naira. With oil prices at a seven-year high continuing to boost the country’s export earnings, we expect the Naira to find support around the 570 level. 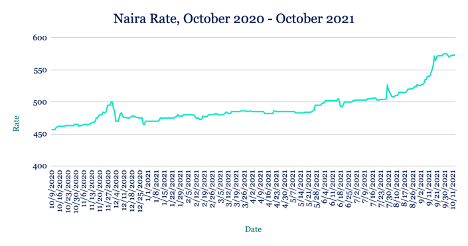 The Cedi depreciated slightly against the dollar this week to 6.065 compared to 6.053 at last week’s close. That mild weakening came despite the expected tranche disbursements of the $1.5 billion cocoa loan facility, with half of that entire funding set to hit the Ghana Cocoa Board account this month. The country’s central bank continues to support the market via its fortnightly forward FX auctions; in the last quarter alone it sold $300 million across its bi-weekly auctions—roughly double the volume in the previous quarter. More support is expected as FX demand increases during the upcoming festive season, and we anticipate that will help strengthen the Cedi in the coming months.

The Rand appreciated against the dollar this week, trading firmer at 14.81 from 14.94 at last Friday’s close, boosted by an increase in commodity prices including key exports such as gold and platinum. Declining US treasury yields also revived appetite for emerging market currencies more broadly, helping the Rand recover from a low of 15.07 at the start of the week when the country was gripped by inflation concerns. We expect the stronger commodity prices to help prop up the currency in the coming week.

Egypt’s Pound was unchanged against the dollar this week, trading at 15.65/15.75. The economy is forecast to grow 3.3% this year, according to the IMF, up from its previous forecast of 2.5% in April. The IMF projects GDP growth will hit 5.2% next year and 5.8% by 2026. Egypt this month signed loan facilities worth $2 billion to help finance green projects in the country; it is also expected to issue more sovereign green bonds, having become the first nation in the Middle East and North Africa to sell such debt last year. We expect to see a stable pound this coming week with support from investor inflows.

The Shilling depreciated slightly this week, trading at 110.85/ 111.15 compared with 110.55/ 110.85 at last week’s close, amid increased dollar demand from importers. Pan-African credit rating agency Agusto & Co. this week affirmed Kenya’s rating at B+, describing its debt situation as ‘moderately high risk’. The agency forecast that the country’s economy will grow 3.8% this year, significantly lower than the IMF’s estimate for 5.6% GDP growth. Kenya’s foreign exchange reserves stood at just shy of $9.4 billion last week, adequate for 5.73 months of import cover. We expect the Shilling to remain under pressure over the coming seven days due to higher oil prices and sustained dollar demand from importers.

The Shilling slipped to 3590/3600 from 3555/3565 at last week’s close amid increased interbank demand for dollars. An effort from Uganda’s central bank to support the currency by selling dollars into the market was not enough to arrest the slide. The central bank also this week held a UGX 200 billion treasury bill auction with 91-day, 182-day and 364-day tenors. We expect the Shilling to remain under pressure in the near term due to increased demand for the greenback.

The Shilling traded flat against the dollar this week at 2300/2310, mainly cushioned by inflows into the country. The IMF this week released the $576 million COVID relief loan it approved for Tanzania early last month. The funds will be used to implement development projects in sectors such as education, water, health and tourism that have been affected by the coronavirus pandemic. The IMF forecasts that Tanzania’s GDP growth will hit 4% this year and 5.1% in 2022. We expect the Shilling to gain support in the near term from investor inflows and agricultural exports, notably coffee.