Zimbabwe’s Vice President Constantino Chiwenga has hit out at the country’s informal currency traders after the Zimbabwe Dollar plunged against the greenback on the parallel market to 162—almost double the official market rate of 86 to the dollar. The fall in the unofficial rate has led to a hike in prices that threatens to set back efforts to revive the economy, with inflation running at above 50% annually in August. Zimbabwe’s central bank has been cracking down on illegal forex dealers and ordered the closure of their bank accounts, a move that mirrors a similar action taken by the Central Bank of Nigeria that has fuelled a shortage of dollars in the West African country.

The Naira has remained relatively steady on the unofficial market this week, trading in a narrow range between 570 and 573 to the dollar. The currency has arrested its recent decline on the parallel market despite thin dollar supply driven by the cessation of FX sales to Nigeria’s bureau de change operators. The calmer backdrop comes as foreign exchange reserves increased in September to $36.1 billion from $33.5 billion in August, according to the Central Bank of Nigeria’s 30-day moving average snapshot. That increase was likely buoyed by rising oil prices as well as the IMF’s special drawing rights allocation and the country’s $4 billion Eurobond deal in September. The CBN also launched its e-Naira last Friday to act as complementary legal tender in Nigeria. We expect the Naira to remain stable over the next seven days amid subdued holiday trading. 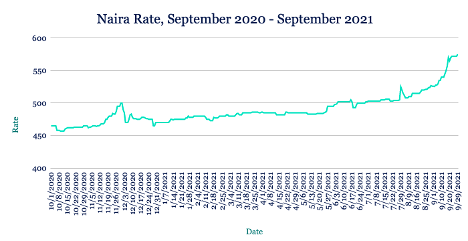 The Cedi was broadly unchanged against the dollar this week, trading at 6.045 compared to 6.042 at last week’s close. Ghana’s central bank on Monday kept its policy rate on hold at 13.5% as ongoing inflationary pressures that could result in further depreciation of the currency are balanced by expectations of sustained economic recovery from the COVID-19 pandemic. We expect the Cedi to remain stable against the greenback over the coming week supported by the IMF’s recent special drawing rights allocation and proceeds from a $1.5 billion cocoa loan signed last week that will help boost exports.

The Rand weakened against the dollar this week, sliding to 15.17 from 14.94 at last week’s close as emerging market sentiment soured, driven by a more hawkish tone from the US Federal Reserve and broader concerns about the health of the global economy. That downbeat mood overshadowed the South African Reserve Bank this week announcing a primary budget surplus for the first time since 2018. With risk appetite depressed globally, we expect the Rand will remain under pressure in the near term. 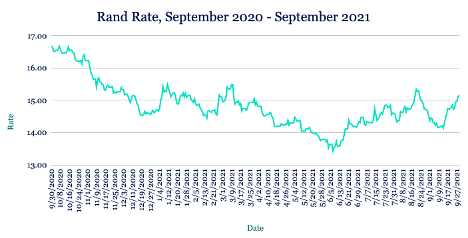 The Pound weakened marginally against the dollar this week, trading at 15.71 compared to 15.70 at last week’s close. Egypt’s government is intensifying vaccination efforts against COVID-19 to meet a target of immunising 40 million Egyptians by the end of this year. Egypt is also preparing to ramp up local production of China’s Sinovac vaccine in a bid to boost vaccine availability in Africa countries, with 80 million doses expected to be produced by the end of December. Against this backdrop, we expect the Pound to remain stable in the near term.

Kenyan Shilling tip-toes back from 2021 low

The Shilling traded at its lowest level of the year this week amid increased demand for dollars from importers. The currency was unchanged at a 2021 low of 110.54 on Monday before recovering slightly to 110.50 after Kenya’s central bank on Tuesday held its base lending rate at 7%. Inflation accelerated slightly in August to 6.6% from 6.5% in July on the back of higher fuel and food prices. However, the economy is still projected to grow 6.1% this year and 5.6% in 2022, underpinned by the ongoing deployment of COVID-19 vaccines, relaxation of travel restrictions and the reopening of various sectors. We expect the Shilling to maintain current levels over the coming week, supported by the country’s foreign exchange reserves, which remain adequate at $9.5 billion. 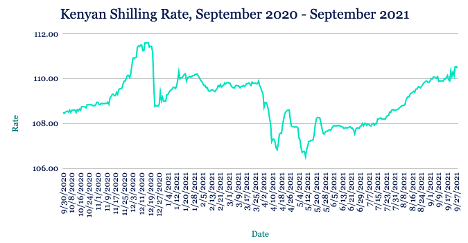 The Shilling weakened against the dollar this week, trading at 3540 compared to 3534 at last week’s close, driven lower by month-end dollar demand from importers. Uganda is expected to increase coffee exports to Saudi Arabia to meet growing demand in the Arab nation, where the market is forecast to grow at a compound annual growth rate of 6.2% over the next six years. However, we anticipate further pressure on the Shilling over the next seven days from elevated month-end dollar demand. 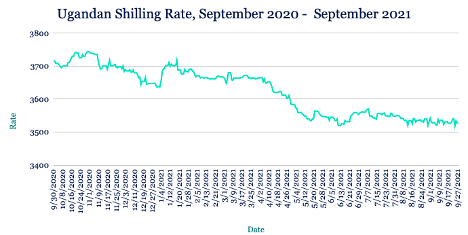 The Shilling strengthened to its highest level against the dollar in about 16 months, trading at 2309 compared to 2325 at last week’s close, boosted by increased investment inflows during President Samia Hassan’s first six months in office. The Bank of Tanzania said goods exports increased by 5% to $6.5 billion in the 12 months to July, driven by gold, manufactured goods and horticulture products. The Tanzania Investment Center said new investment projects registered between March and August increased to 133, totalling almost $3 billion. The investments span agriculture, construction, trade, energy, infrastructure, finance, financial institutions, transportation, tourism and services sectors. We expect the Shilling to continue being supported in the near term by continued export and investment inflows. 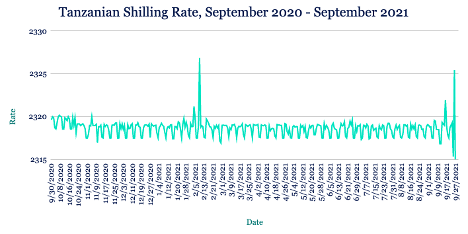